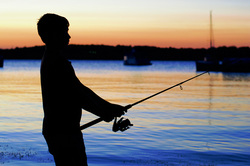 It was a warm evening on the lake. The water was calm and mirror-like. Nine year old Andrew and his Grandpa were going fishing. Andy had a fishing pole in one hand and his tackle box in the other. Grandpa carried the round tub of worms and a big net.
After setting up on the dock, Grandpa put a red and white bobber on Andy's fishing line. The bobber would tell Andy when there was a fish on the hook.
Andy put a wiggly worm on his hook and cast the line into the water. In a few minutes, the red and white bobber began to wiggle. Then it bounced up and down. He knew a fish was playing with his bait.
Suddenly the red and white bobber was under water and Andy could see it being pulled away from the dock. The fish had taken the bait. Andy knew it was time to set the hook. He gave the rod a yank and started to reel.
He could tell by the pull on the line and the bend in his pole that it was a big one! Andy and his Grandpa both hooted as the pole almost bent in half. "Keep the tip of the pole up Andy!" Grandpa urged. "Keep reeling, it's a big one!"
Without warning Andy and his grandpa watched in surprise a a big, beautiful bass jumped straight up and out of the water. "Grandpa did you see that? That's my fish!" cried Andy.
Andy gripped the rod tightly. He reeled and reeled and reeled. Finally, he was able to bring the fish close enough to the dock so grandpa could reach out to net the fish.
Grandpa carefully removed the hook from the fish's mouth. The fish was placed on a stringer to make it easier to carry him up to the house. A proud Andy held the stringer to show of the beautiful bass.
"That's quite a fish you caught and quite a memory you made!" Grandpa said happily.
They walked from the dock toward the house to show Andy's mother, sister and the rest of the family. Cameras clicked as Andy grinned from ear to ear showing off his big fish.
"Grandpa, I love to fish!" exclaimed Andy. "It's so much fun and it's so peaceful out here on the water. Maybe we can teach Emily to fish, too. I know she would like it."
Andy called out over the water. "Thanks for the great fight, Mr. Bass. I had fun!"