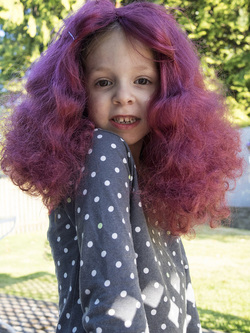 Emily had ridden her bike through the whole neighborhood looking for someone to play with. Not one of her friends was home. She whined to her mother about being bored. She had been in and out of the house letting the door slam behind her each and every time.
Cranky because she missed the ice cream truck, Emily didn’t want to color or paint as her mother suggested. She hated being quiet while her baby brother napped.
As the screen door slammed once again, Emily overheard her mother grumble,”How can one little girl be so noisy?”
Stomping onto the sun porch, Emily pressed her face against the window making another smear for her mother to clean. A movement on the sidewalk caught her eye. It was a tiny Bluebird pecking at seeds. His feathers were bluer than the sky.
Suddenly, Emily sneezed. “Achooooooooooo!”
The startled Bluebird flapped his tiny wings and disappeared into the maple tree outside the window.
Emily turned and walked back into the house. The door slammed behind her. “Mom,” she whined loudly, “I’m bored.”
Her mother knelt down and looked Emily in the eyes. “Please be quiet. You can either play outside or inside, but quietly. Use your imagination, think of something to do without being so noisy.”
Emily decided she didn’t want to be outside since it had started to rain. Her head drooped as she walked into the hallway. Standing in front of the curving wide bannister, Emily lifted her eyes. If she stood in the right spot, she could tip her head waaaaaay back and see the stairs twist all the way to the third floor. Standing on the bottom step, hand on the bannister, Emily Mae had an idea.
A grin spread across her face as she ran up the winding steps to her room. The turning staircase would be a great place to play.
While in her room, she grabbed her colorful cloth treasure bag lying on the floor. She threw it over her shoulder and scampered up the third floor steps.
Emily reached into the bag. She found a yellow headband with green pinwheels and put it on her head. She pulled out hot pink sunglasses and put them on. Tying a blue doll blanket around her shoulders like a cape, she announced, “This blanket is going to be my wings.”
I would love to have wings like that little Bluebird, she thought. I could quietly disappear into the maple tree outside and never have to help with the dishes.
The power of her imagination took over. Emily imagined having soft, blue feathers. As if drawn to the bannister, Emily stood and threw her leg over the wide curved railing and started to slide. From the third floor, she gathered a lot of speed.
Turning around, Emily began to slide backwards. The blue blanket flapped over her head, the pinwheels were spinning wildly. Emily Mae was flying!
The end of the staircase approached. Emily didn’t realize she was at the bottom when she zoomed off the end of the bannister and hung in midair for a split second. With a loud thud, Emily made a hard landing onto the tiled floor. She couldn’t get her breath. She panicked which made it worse.
“Emily, what on earth was that noise?” Her mother called out from the living room. “Emily…?”
Still not able to speak, Emily was flat on her back making chirping noises. She thought about what had just happened. Believing that she was flying was fun, but landing on the hard floor was not. Everything hurt as she got her breath back and tried to sit up.
“I should have worn my bike helmet!” She moaned.
Emily looked once again at the magnificent curving staircase. She had discovered a wonderful place to play. “I loved playing on the stairs, but I won’t be sliding down the bannister ever again.”
Emily straightened the drooping blue blanket. She imagined smoothing her ruffled blue feathers. Pushing a lock of hair out of her eyes, she adjusted the pinwheel headband. Hearing her mother call out again, Emily pushed the sunglasses back up on her nose and answered. “I’m coming, Mom.”
Emily wobbled from side to side as she stood up. Wincing as she rubbed her bottom with both hands, she hesitated before skipping toward the living room.
The pinwheels were still spinning as Emily approached her mom.
She saw her mother’s eyes widen and a smile begin to spread across her face. Emily heard her mother trying to stifle a laugh.
Her mother asked, “What on earth was that noise, Emily Mae McHenry? Leaning forward, arms outstretched, her mother softly repeated, “What was all that noise, funny girl?”
Emily giggled and walked into her mother’s arms. A little blue feather fluttered to the floor unnoticed by either Emily or her mother.
“I’m sorry Mom, it was me! What you heard was just me…and my noisy imagination!” 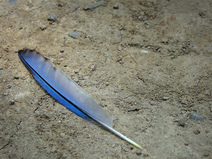