﻿What an interesting story﻿ 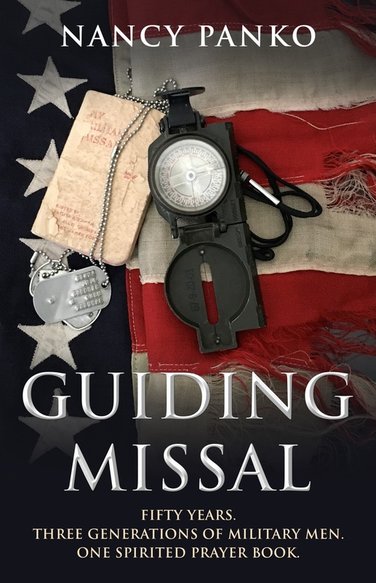 The cover of Guiding Missal in and of itself tells the story of war.

The flag in the background flew atop the USS PC 568 Submarine Chaser at the time of the Normandy invasion on June 6, 1944. On that day, the ship was patrolling the waters off the coast of France while the bloody battle on shore was taking place. The next day the commander of the ship ordered Seaman Kenny Lewis to take down the tattered, soiled battle flag and replace it with a new one. The commander's order was "to show the enemy and the French people that the Americans are still here." Kenny took the flag down and put a new one up. The battle intensified. Seaman Lewis quickly folded the soiled flag,  tucked it inside his shirt, and got back to work. Kenneth Lewis carried that battle flag in his sea bag for the duration of his service in World War II. He brought it home keeping it in a safe spot. The precious memento was lent to me for the photo shoot by retired Gunnery Sergeant James Lewis, son of Seaman Kenny Lewis.

The compass on the cover is similar to that which the first soldier in the story, carried during the Battle of the Bulge, and the dog tags are from Gunnery Sergeant James Lewis, himself a highly decorated war hero of the Vietnam war.

​The little book in the center is the actual Military Missal carried by all three characters in the book. Its message stands the test of time and will for all eternity.