MEET THE MEN OF "GUIDING MISSAL" 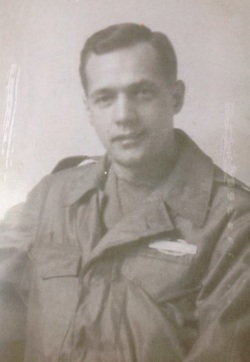 1942 THROUGH 1945
George J. Panko, Sr., was drafted in March 1942 and reported for basic training. "My Military Missal" was placed in the stack of government issued clothing given to him when he chose a particular Catholic prayer book. After basic training and working as a baker, he volunteered as a Forward Observer, training in covert operations, and was assigned to the 289th Cannon Company 75th Division, 9th Army and sent to the ETO (European Theater of Operations). He participated in the brutal fighting during one of the worse winters in European history. The Battle of the Bulge tested his mettle but, through the Grace of God, he was not captured, killed or wounded. The son of Russian immigrant parents, George grew up speaking and reading Russian. For this reason, he was chosen to go to Berlin in 1945 as an interpreter for the United States at the surrender of the Germans to the Russian forces. In 1945, he returned home to his wife and son, George Jr. His story is the first to be told in "Guiding Missal." 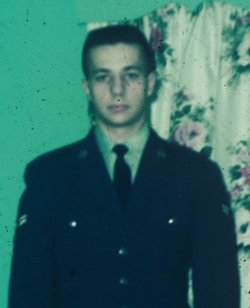 1960 THROUGH 1964
George J. Panko, Jr. (Butch) enlisted in the United States Air Force at the age of seventeen. His father presented the Military Missal to Butch before he left for basic training. He accepted responsibility for the prayer book knowing what it meant to his father. After several tech schools and top secret clearances, he was deployed to Hahn AFB in Germany. During this time the cold war heated up to a boil resulting in "the Berlin Crisis" and the building of the wall. While serving in Germany, Butch received a recommendation to attend the Air Force Academy. He was faced with a difficult decision resulting in immense personal growth. He left home a boy but returned a man, matured by responsibilities placed upon his shoulders. Participating as a player on the Hahn AFB football team, Butch traveled throughout Europe to engage teams from other bases. Those travels were the same routes his father had taken during the war. That realization resulted in an epiphany for Butch who was humbled by the sacrifices men had made to liberate those cities, towns and villages to put an end to Adolph Hilter's domination. 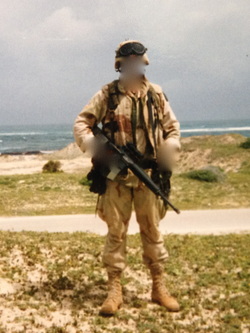 1992 THROUGH 1993
Terry Owen Williams (not his real name) enlisted in the United States Army in 1990. Like George Sr., he was trained as a scout/forward observer and was a skilled sniper. Terry Owen, nicknamed TO, carried more sophisticated tools of the trade, quite different from those of WWII. TO had the benefit of night vision goggles, electronic communication headsets, GPS and powerful weaponry. Stationed at Fort Drum, New York, he met Margie Panko, granddaughter of George Sr. and daughter of Butch Panko, in a tourist town along the St. Lawrence River. Five months later, the couple married in a civil ceremony prior to TO deploying for Mogadishu, Somalia. Two days later, his unit was told to "stand down." He had two weeks leave and remained stateside for a few months until deployment in July 1993. That delay in deployment put him in Mogadishu as Somali militia men ramped up attacks against the multi-national forces in the country to aid in "Operation Restore Hope." The hostile actions escalated until reaching a head in the fierce battle known as The Battle of Mogadishu or "Blackhawk Down" after the book and movie. Terry credits his survival to God and the third generation Military Missal he carried in his BDU pants pocket.
Proudly powered by Weebly
Photo used under Creative Commons from Kitty Terwolbeck